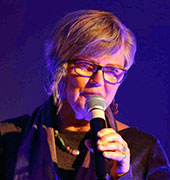 Alianait is based in Iqaluit, Nunavut and before her retirement in December 2018, Heather was a leading force in Nunavut’s arts sector for more than sixteen years.

The Festival is a non-profit organization with charitable status, designed to bring community together to celebrate the arts. Alianait presents a program of music, film, theatre, circus, storytelling, dance and visual arts, with a focus on indigenous artists from the circumpolar world.

Heather now provides consulting services to arts organizations, including the Nunavut program for the 2019 Riddu Riđđu world indigenous Festival held in Manndalen, Norway, and is a volunteer board member for Human Cargo Theatre Company and Propeller Dance.

Earlier work for the Ontario and Nunavut governments included 6 years as Director of Court Services for the Nunavut Department of Justice.

Heather was awarded a Queen’s Diamond Jubilee medal and the Senate’s Canada 150 medal, and has also been recognized by both the Government of Nunavut and City of Iqaluit for outstanding community service.